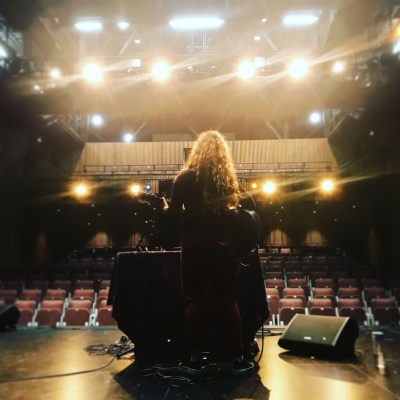 Up-and-coming music artist IORA, brought her music and a selection of other acts to the Griffin Theatre at Rendcomb College for an evening of entertainment, on Saturday, 13 January to raise money for local Charity CHYP (Cirencester Housing for Young People).

The raised nearly £600 for CHYP who work with vulnerable, young homeless people in the area, providing stable housing and support for those in need.

IORA has previously appeared at the 2,000 trees festival in Cheltenham and the Dot-to-Dot festival in Manchester. Her single “Thieves’ Den” has been played on BBC Manchester Introducing and was recently included in BBC introducing’s Sound of 2018 Winner, Sigrid’s playlist as an artist to watch.

Joining IORA on stage were a selection of other acts including comedy duo, Force of Habit, made up of Lance Baynham and Cormac Connelly-Smith, and singer-songwriter Mark Gunner, who showcased in his own compositions on bass guitar and voice.